Living in Buenos Aires as a “TOURIST” 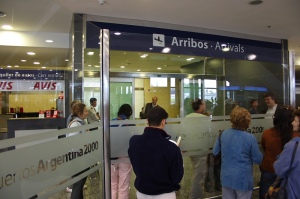 First of all, a lot (more than half based on my research) of Americans living in Buenos Aires do so under the “tourist” category, meaning that upon entering the country they get a stamp in their passport that allows them to stay in the country for 90 days of “tourism”. However, I discovered that many Americans have been living in Buenos Aires for years as “tourists”. Some of them leave the country every 90 days and then get a new stamp when they re-enter, but most of them tend to “overstay” their 90 days, and pay the $300 peso fine when they do eventually leave the country (many claim it’s cheaper than taking a trip every 3 months).

Although the tourist category is the route most taken, it is, let’s say, “frowned upon” by the DNM (Dirección Nacional de Migraciones) as a long-term solution (according to one of my UBA professors, who happens to be one of the Directors at the Dirección Nacional de Migraciones). Also, technically you are not allowed to work in Argentina under this category, and at least in my research, I found that the overwhelming majority of the “tourists” are working in Argentina.

UPDATE 2014!! They are starting to turn away “tourists” that have been living long-term in Argentina. There have only been a couple cases reported in the last year (two that I’m aware of) but unfortunately it is a real possibility….check out what this “rechazo de ingreso” notice looks like and what you can do here.

Those issues aside, Argentina actually doesn’t see this type of immigration (Americans) as a “problem” (the exact word used by my aforementioned professor), and in general Argentina’s immigration policies are quite “open”, so booting Americans out of the country is definitely not a national priority nor anything we should worry about. I have been living in Buenos Aires for 5+ years now and have NEVER heard of an American being deported or officially banned from the country for overstaying their tourist visa. Most of the Americans I interviewed that have been living in the country for years this way have faced minimal problems (aside from the occasional rude immigration officer).

Despite their “tourist” status, according to my research, most of these Americans would like to have residency as they feel it would improve their quality of life and standard of living in Buenos Aires. Unfortunately, because most of them work “under the table” or remotely, their options are limited.

Can I become a “TEMPORARY RESIDENT”?

You may apply for temporary residency under one of the following categories, which are listed below along with the specific documentation that you’ll need to provide.

Can I become a “PERMANENT RESIDENT”?

a) Your birth certificate

b) Birth certificate and National Identity card of your spouse, parent or child

c) Marriage Certificate (if applying through your spouse)

IF YOU DO QUALIFY FOR ONE OF THESE CATEGORIES AND WANT TO APPLY FOR RESIDENCY, CHECK OUT MY DETAILED GUIDE HERE: How to get residency in Argentina.